Data can be inserted into a geography column in a table using references to spatial data objects such as POINT, LINESTRING, POLYGON etc. Some example inserts into a table that has a Location column of type geography are:

The spatial data types also have built in methods allowing spatial computations to be carried out as part of an SQL query. There are many such methods including: STDistance(), STIntersection(), STUnion() and STDifference(). The first of these STDistance() calculates the distance between two points or shapes, in metres when using the default coordinate system, as shown in the example below:

The answer is just over 402793 metres which when divided by 1609.344 gives 250 miles which is correct given that the first point is in London and the second one is in Paris. So spatial shapes can be stored in a database and calculations can be carried out on them in SQL queries. But how do we visualise spatial data? Well one way is to the use the mapping facility in SQL Server Reporting Services (SSRS).

Conveniently the AdventureWorks sample database has a geography column called SpatialLocation in the Address table. So to demonstrate the combined capabilities of SQL spatial data types and maps; I have devised an example report in SSRS that allows a user to select an address in New York together with a distance in miles and then display on a map all the addresses that are within the distance.

I first wrote a query to return all the addresses in New York. This query is used to populate the dropdown list for the user to select a starting address:

I then wrote a query to return all the addresses within @Distance of the selected property. Note the used of the STDistance() spatial method to calculate the distance between the addresses. This query will be used to plot the addresses on the map:

Next step was to create a new blank SSRS report in SQL Server Data Tools and add: 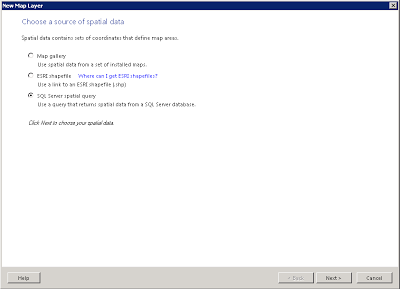 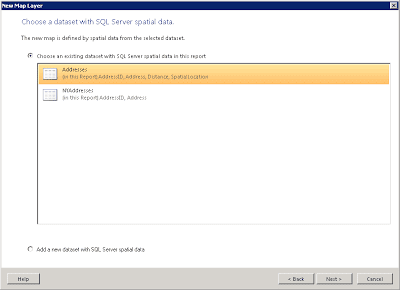 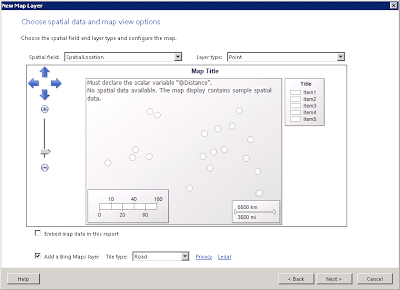 On this screen I selected “Layer Type” as Point and I checked the “Add a Bing Maps layer” option. I ignored the message about the @Display variable because I have defined it as a parameter and so I knew it would be OK.

For the rest of the Wizard screens I just selected the default options.

I then opened the Point Properties dialog for the Point Layer on the map and changed the fill colour to Red to make it easier to see the points on the map.

The result is below with 8 matching addresses shown for the 50 mile radius. Change the New York Address and the distance and click View Report and the map is rescaled and redrawn as required.

This is a simple example, but it shows how easy it is to create a spatially aware application using SQL Server. The database engine stores the locations and calculates the distances, while SSRS renders them nicely as a familiar and easy to use map.

This article is based on SQL Server 2012.