Office 365 — 2 Years old. What does this mean for customers?

Although just over 5 years ago, you will remember with a nostalgic smile on your face that this was the time when “the cloud” (*does that inverted commas things with his fingers) was the answer to everything.

Despite the overused term, it was a promising start in “the cloud” (*does that inverted commas things with his fingers … again) from Microsoft, who for less than £6 per month, per user, offered customers the following features:

Not bad. However, many users at the time, felt this had been rushed as the online versions of the products were often lacking many of the key features that their server based, on premise equivalents had.

This was extremely unlike Microsoft who, even now, seem to take their time on their product releases.

Around the launch time, Microsoft were competing with the emergence of Google in the collaboration market, whose Google Apps were busy signing up whole cities.

The pressure was unwarranted though as Google Apps (in my humble opinion) always felt clunky and feature poor in every area apart from email. Certainly not good enough for enterprise customers.

Fast forward to June 2011 (and a few major Google Docs outages) later, Microsoft did what Microsoft always do.

They got the product right in later releases.

BPOS was no more and was swiftly rebranded as Office 365 in June 2011.

So two years later where are we now? What else has changed?

Well, a few things have happened to make even Microsoft’s fiercest critics sit up and take notice.

So what exactly is in Office 365 and what does Microsoft offer us in “the cloud” (sorry I couldn’t resist) in 2013?

Having used this for a few years now, I can honestly say that managing users and licences is a doddle in Office 365.

Whilst Active Directory, in my opinion, will always be the way you should manage user profiles in the enterprise; with Office 365 you have a choice.

You can either create users online or synchronise with AD. Companies with a smaller user base just want an “easy to manage” system and add new users themselves. As you will see from the image below. It’s a clear and simple form and a five step process. 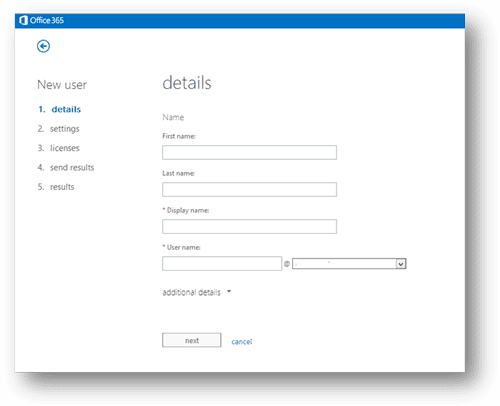 Forgetting the great features of SharePoint online for just one minute, the thing that I really like about SharePoint Online these days is how quick it is to get up and running.

It now takes literally hours to get an account and basic site set up.

Other good news is that the online and on premise versions of SharePoint are pretty much like-for-like in terms of functionality these days.

This is great news for smaller and medium sized businesses who no longer need to set up server farms or pay for relatively expensive hosting arrangements. They simply pay a monthly fee, per user.

In the same way that you can purchase “bolt ons” for your mobile phone tariff, you can now purchase additional components for SharePoint Online using the Office App store.

Literally this week, Microsoft announced that they will be operating a subscription plan, where developers can share a spoil of the revenues if customers purchase monthly subscription Apps.

This is great news for SharePoint Online, especially as developers and well respected vendors like workflow provider Nintex are already creating Apps.

I can see a time in the near future where some of SharePoint’s previous shortcomings could be overcome as there will be an “app for that”.

Microsoft’s purchase of Yammer in the summer of 2012, baffled a lot of people at the time as it looked like that Microsoft were just starting to get a grip on what enterprise customers wanted from social features.

In the launch of SharePoint 2013, they had actually done a fairly good job bringing the Facebook / Twitter type functionality to the enterprise so why did they need Yammer?

My guess is that Microsoft saw a natural connection and huge opportunity to get Yammer users using SharePoint and visa versa.

In June 2013, Microsoft confirmed that users could now select Yammer to replace the newsfeed in SharePoint Online. 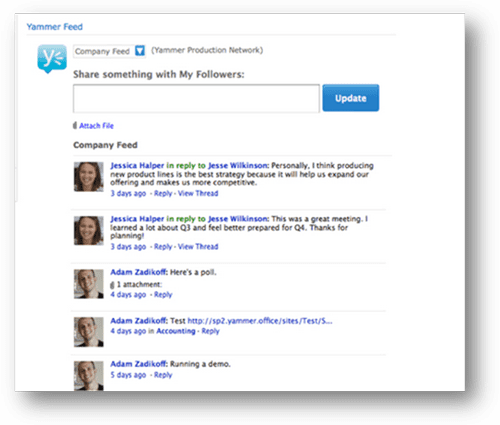 In my mind, this is a bold move but a good example of how desk based and mobile employees can and will collaborate in the future. In theory, anyone checking in or updating their status can stay in touch either using web based tools or one of the many mobile apps available.

Office Communicator was soon replaced with Lync in Office 365 and connects to Exchange, and SharePoint allowing users to check the online presence of colleagues and contacts. This also allows voice and video calls plus screen sharing. A “must have” for businesses in 2013.

Most subscriptions of Office 365 now include the desktop licences for Word, Excel and PowerPoint etc., as part of the monthly fee.

I really like the fact that I know I am always going to have the latest version of the software now for a relatively low outlay each month. In many ways, Office 365 has simplified the licensing with Microsoft.

So what for the future hold for Office 365?

I think that Office 365 will continue to be the trusted business software but people will soon be treating SharePoint like one of the Office family alongside Word, Excel and PowerPoint.

This will also see a huge rise in the amount of knowledgeable SharePoint users which is great news for businesses across the globe. It’s got to be a good thing when lots of people know how to truly use collaboration tools.

I fully expect to see Skype (another recent Microsoft purchase) to supersede Lync at some stage as the need for messaging and web based video / voice calls becomes the norm. Skype is heaps better than Lync and will grow in the business arena as companies quickly realise they don’t need a landline. Who uses a desk phone these days anyway!?

I would also expect to see additions to the Office 365 family. Project Management, Business Intelligence and Enterprise Workflow applications are likely candidates.

Microsoft have stated that their acquisition of Yammer has given them an insight into how rapid, iterative releases can be achieved, whilst at the same time maintaining high quality levels also.

All in all, I think Microsoft will be fairly happy with how things are going to date. They have created a suite of products that are easy to use and good value for money. Long may that continue.