Microsoft is doing a great job of embracing open-source, cross-platform technologies. Just look at the release of Visual Studio 2015, we’ve got first-class support for python, node, android, iOS, Cordova, the list is endless. The days of using Microsoft developer tools to develop code that only runs on Windows servers is over.

Don’t believe me? Well let me walk through an example how you can use Microsoft tools to create the full development infrastructure, from source control to build, test, deployment and hosting, to support a node.js project (or any other non-Microsoft language actually) without ever coming across, using or interacting with a Windows Server or Windows operating system. 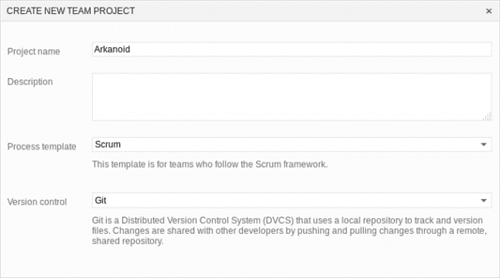 Write and Develop the Code

Now it’s time to start developing your codebase. I’m going to download Visual Studio Code, which is a free code editor from Microsoft. Visual Studio Code supports GIT integration, IntelliSense and debugging of an ever-expanding set of languages and wait for it…it runs on Linux and Mac OSX.

I can start writing my code and start committing and pushing changes into Visual Studio Online. I’m using the Arkanoid game I wrote as an example. We can also debug the node code direct from Visual Studio code and we get IntelliSense on node modules.

You’ll notice at this point that we have been using exclusively Microsoft tools and not once have we had to leave our Ubuntu desktop, and we could have done exactly the same on Mac OSX, pretty sweet.

Visual Studio Online gives us way more than just a source repository. We can also use it to create and manage our development backlog. VSO supports Scrum, Agile and CMMI out of the box and support for customised processes will happen during 2015. You link backlog items to GIT commits and you also get team rooms, scrum and kanban boards.

To get started, first install a VSO build agent onto your Linux server. Next, let’s create an empty build definition: 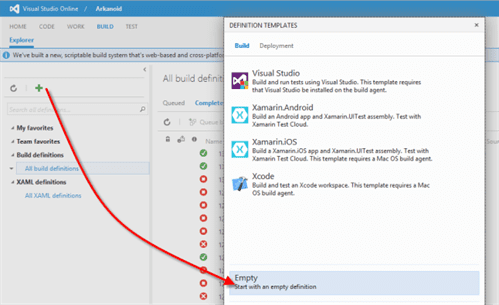 Set the basic repo settings to point to the branch of your Node project you want to build and set the build queue (under General) to point to a queue containing your Linux build agent:

If you queue this build you should see the build agent clone the source onto the build server which is a good start. Let’s add some more build actions, I’m going at add two tasks, one to run NPM install and one gulp task.

NPM install will install all our npm dependencies, an important step to build any node application. Gulp is an extremely simple yet powerful task runner. It’s open-source, based upon node and javascript and has an ever-growing library of tasks available for you to use. For me, the beauty of gulp lies in its ease of use and platform portability. Your scripts can move between Windows and Linux without issue.

Here’s my gulpfile.js. It runs JSHint to analyze our javascript files and detect errors in the javascript code.

Then it deploys the site by pushing a git repo. Azure web apps supports deployment via git, so this script could easily handle deployment to Azure: 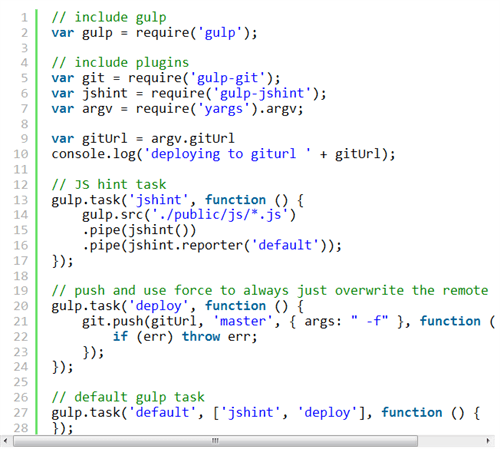 The first lines load up all the gulp components using require, then we simply run the JSHint task and the deploy task. We can easily add many more tasks to the gulp script such as minifying files or stripping out debug statements.

One interesting thing to point out in the script are the lines:

It is common during automated builds to supply build/environment specific arguments into our build scripts. We can achieve that with VSO and gulp using yargs. The code above allows for a command line passed into the gulp script to be used. In the VSO build definition we simply create a variable:

Then update the gulp task to pass this variable into the gulp script:

Running build we will see all tasks running, our gitUrl passed in and parsed and the site deployed to Azure.

There it is. End to end development, testing, versioning and deployment of our node app all from within Visual Studio Online.