For the last four years, Microsoft has held its Future Decoded event in London. The event provides a great insight for where Microsoft sees its future plays coming from. This year it was apparent that Mixed Reality, Artificial Intelligence/Machine Learning, the Future of Work, and demonstrating the ability to innovate were all key to Microsoft. Geoff Ballard (Chief Technical Officer) and I attended from Ballard Chalmers and here are the some of the big topics we saw playing out.

From the first focus of the second day keynote to the huge space allocated to both Microsoft’s and others’ Mixed Reality offerings, it was obvious that Microsoft sees a big future in Mixed Reality and the devices and tools to support it. About a third of the Future Decoded expo hall was allocated to Microsoft and vendors demonstrating what they have done and what they can do with the Microsoft devices. The event last year talked a lot about the potential of these, but this year was very much about demonstrating real-world experience of these being used; from Transport for London providing visualisations on traffic and Underground services in 3D, to VISR demonstrating how you can test different Point of Sale objects for the retail industry in place without any physical objects needed.

Unfortunately, there was not much news on new devices but it was announced that HoloLens is now available in 29 more countries (mostly in Europe) for the developer preview. For those wanting to use HoloLens in industrial settings, Microsoft announced that the device was certified for use as basic protective eyewear and that from Q1 2018 it would have hard hat accessories as well – potentially useful for the more aggressive meetings too! For office workers, there was news that HoloLens would support Microsoft Teams and Azure Active Directory, opening it up for more enterprises to use it for collaborative meetings. This has huge potential for integrating further with SharePoint-based assets and working collaboratively on items in a natural environment. If you are interested in exploring more about how this could help your enterprise, don’t hesitate to contact us.

Shift in Focus Towards Frontline Workers Alongside Information Workers

Alongside the HoloLens and Mixed Reality announcements in the keynote, there was more evidence at Future Decoded of an interesting shift in focus from Microsoft. With much of its productivity and collaboration tools, the focus has very much been on the Information Worker who are more desk-bound and attached to a PC. However, the new technology of Mixed Reality is opening up a lot more opportunities for engaging with Frontline Workers with devices focussed on helping five main areas:

This is not just a trend being seen in the Mixed Reality space with new licensing for Office 365 for Frontline workers who will not have full access to all software but can have mail, enterprise social network access and engage on multiple devices. This opens up digital transformation to even more staff and inspires more ideas for expanding the digital workplace.

Artificial Intelligence Will Power the Future of Work

Artificial Intelligence (AI) is a hugely broad term and there has been some stretching of the definitions used in many areas. However, the Future Decoded expo floor showed how the power of the Microsoft services can be integrated simply into the workplace. Bots were everywhere but as functional and useful mechanisms rather than the theoretical ideas of last year. There were several talks on Cognitive Services and how these can be built into custom applications to better power intelligent applications. One example was how Flex delivered Flex Concierge which was announced at the conference and offered a one-stop bot for all your internal needs. This was built on the Microsoft Bot Framework and allowed you to leverage your own bots as well as others from enterprise tools. If you are interested in how bots can help, Ballard Chalmers can help demonstrate how they can be built specifically to your business needs.

If you are more on the development end of things then you were not left out. There was a great talk on using Cortana to offer voice-powered deployments to different environments! All these tools and services open up more ways of interacting and new ways of thinking about what can be done.

New Ideas Are Key to the New Microsoft

Talking of new ways of working, it is obvious at Future Decoded that Microsoft wants to shift the way people have often thought of the organisation as just building services around existing ideas. It announced the Quantum Computing initiative recently at the Ignite conference and there were more talks on some of the details of this. For many, the details of how Quantum Computing is lost on them (and we are not even going to try and address them here!) but the interesting capabilities are around running large scale algorithms in a fraction of the time. Classical computing runs through calculations one at a time with performance improvements made by adding more ways to calculate or speeding up the calculations. Quantum Computing takes a different approach, considering all outcomes and picking up the correct one. How? Well, hopefully, Microsoft can answer that!

Microsoft is also looking at the problem of how much storage is needed globally as our requirements are growing faster than our ability to hold it.

One solution that the Microsoft Research team are working on is to use DNA to store archive data. This sounds like something from a science fiction film but they have been able to convert 400 MB of data successfully into DNA stored as a liquid and then convert it back into data on a PC. It is not suggesting that suddenly we no longer need to have hard drives and can store data in our body though. The vision is to have a datacentre with these liquids in that can store data that does not need to be accessed quickly. The reason is that just a tiny amount of DNA can store 10TB of data, as shown in the image below. 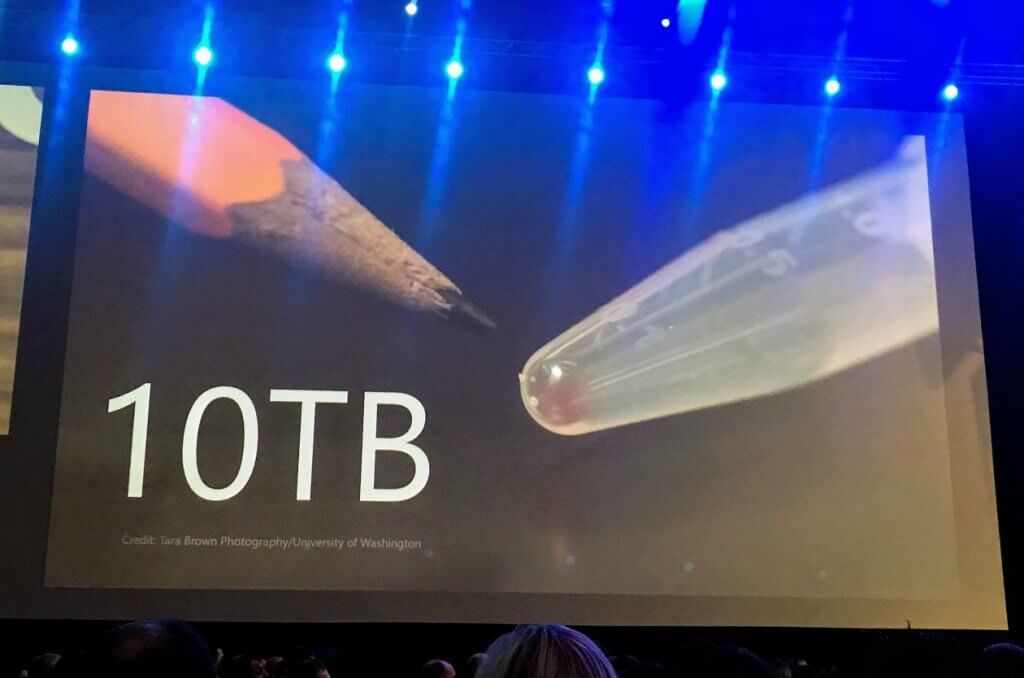 What both of these show is that Microsoft is taking new ideas to solve problems. Satya Nadella is promoting the innovation that Microsoft is showing rather than a slower evolution approach as has been seen before. Both of these things are unlikely to have a direct impact on our day to day lives in the next few years but it could make a much larger change in the future. Microsoft is positioning itself not just for the here and now but to be around for many years to come.