Biztalk Server Is Here to Stay, and This Is Why

Mid-2017 there was a rumour doing the rounds that BizTalk Server was going to be retired, or at least slowly begin to take a back seat to products like Azure Logic Apps. This rumour has not entirely gone away. After investigating it ourselves last year, we discovered it was unfounded and traced it back to confusion over the retirement of BizTalk Services.

Back in June 2013, Microsoft released BizTalk Services as part of its Cloud strategy. BizTalk Services provided out-of-the-box, cloud to on-premises and line-of-business application integration for SAP, Oracle EBS, SQL Server, and PeopleSoft. The user could connect with any HTTP, FTP, SFTP, or REST data source, as well as route messages by using various Azure artifacts such as Service Bus queues, Topics, SQL Database, and Blob storage. BizTalk Services filled a gap by taking familiar features available on-premises in BizTalk Server and made them available for the Azure cloud without the need to set up architecture.

Then in June 2017, Microsoft announced the retirement of the product saying, “Azure Logic Apps meets and exceeds the capabilities found in BizTalk Services.” The idea was to simplify the customer experience across enterprise integration services. This made sense since Azure Logic Apps is an integration engine that resides in the cloud and helps to facilitate hybrid integration – there is no need for two products doing the same thing.

So Why the Rumour About BizTalk Server Retirement?

One possibility for the birth of this rumour is that a generic-sounding product name like BizTalk Services (noun) was confused with the totality of BizTalk Server services (verb). There is a Chinese proverb which says, “What is told in the ear of a man is often heard a hundred miles away,” and in verbal conversations, BizTalk Services could easily be misunderstood as BizTalk services.

Perhaps the rumour did not reach Redmond, or if it did, perhaps Microsoft opted to not address such a rumour because it was just that. The stance we have heard from Microsoft is simply, “This consolidation is not changing the BizTalk Server product”.  In other words, BizTalk Services is going but it is business as usual for BizTalk Server.

For reassurance, a quick search for ‘Microsoft Integration’ in May 2018 returns the following top 3 organic results: 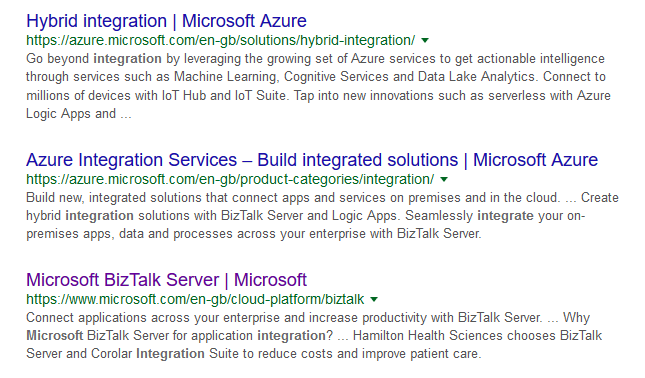 BizTalk Server is there. It is not surprising that the first item is Azure or even that hybrid places above on-premises.

Microsoft Is Not Competing Against Itself

Despite the rapid adoption of cloud-based applications, there is still a need in the market for an efficient way to let these systems communicate with legacy software. Microsoft knows this and is not going to shoot itself in the foot by ending the still very much needed on-premises product.

BizTalk Server is not being pitted against the Cloud. With BizTalk Server and cloud integration products like Azure Logic Apps, Microsoft is providing you, the customer, with options.

The reality is that many organisations either choose not to, or cannot move entirely to the cloud for very good reasons, and this is one solid answer why BizTalk Server will continue to be a mainstay of the Microsoft Application Platform for the foreseeable future. Based on an organisation’s individual needs, BizTalk Server, or Azure Logic Apps, or a hybrid of both will do the job of enterprise integration.

BizTalk Server and Azure Logic Apps are not alternatives to each other; in fact, they work best together!

With the Integrate 2018 conference set to take place in London from 4-6 June, it will be interesting to see what new information arrives. Watch this space.

Ballard Chalmers is one of the very few Microsoft BizTalk Server experts in the UK, and we will continue to deliver BizTalk Server, Azure Logic Apps cloud and hybrid solutions to best fit our clients’ requirements.

We are one of a handful of BizTalk Server experts in the UK. Along with a Microsoft Gold Competency in Application Integration, we have decades of experience with the technology. As BizTalk Server is here to stay, if you need support of your BizTalk system, are looking to modernise or even make the jump to Azure Integration Services, get in touch.