What is the BizTalk Migrator/Azure Integration Migrator?

The BizTalk Migrator (or Azure Integration Migrator) was first announced at the Integrate 2020 event in June by Microsoft, and released formally in the October. It is designed to analyse your BizTalk artefacts and convert these to Azure artefacts i.e., Logic Apps, API Management, Functions etc.

However, a word of warning, BizTalk has been around for over 20 years and not all that BizTalk offers is supported in Azure. At the same time, what you have available in Azure is much more than you get with BizTalk. So, any migration will likely be complex and not necessarily straightforward.

Let’s look at the tool in more detail to understand what it can do to help migrate our BizTalk solutions to Azure Integration Services.

The Six Stages of the BizTalk Migrator/Azure Integration Migrator

There are in all six stages: 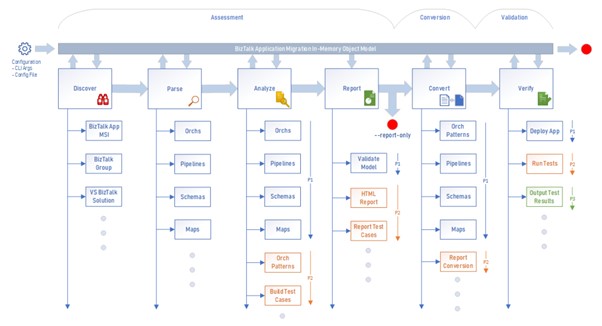 This stage reads the BizTalk artefacts and builds up a source data model of the BizTalk Application.

This stage generates a report of the information created so far. It contains both the source data model and the target data model. The report contains detailed information on the contents of the source and target applications and will also detail any problems with the conversion.

This stage uses the target data model which creates a set of source files (Azure Templates) that are used to build the application in Azure.

This stage is not currently built into the BizTalk Migrator but is where you would run the installation scripts to deploy your application to Azure. You can then assess whether the generated Azure application covers the functionality of your on-premise BizTalk Application.

These are used for external communication with other systems and are similar to the adapters in BizTalk.

These are blocks of logic and represent pipeline components, maps and orchestrations.

These are the same as what we have in BizTalk and is the data that is passed between the components listed above.

The BizTalk Migrator tool goes a long way to automating the conversion of your BizTalk Applications to Azure but there are areas where you will have to update the generated Azure artefacts i.e., Orchestration Exception Handlers have no equivalent in Logic Apps so any specific code will need to be added manually.

As it is open source, you are able to extend the tool to cover common scenarios in your BizTalk Applications, saving having to make manual changes every time. You can find it here on GitHub.

Get Help With Your BizTalk System

If you need help migrating your on-premise BizTalk system to Azure Integration Services, get in touch and find out how we can help. If migration is not on the cards quite yet, but you’re in need of some BizTalk experts, we are also able to help, just contact us.